Have you guys heard the news about the baby panda born at the National Zoo? Well, it’s very exciting, although my kids’ reactions were strange. When I told them the girl panda had a baby, my son immediately said, “THEY SHOULD NAME IT MICHAEL.” When I asked why, he said, “I don’t know, I just want a panda named Michael to live at our zoo.” Um. Then I told my daughter about it, and she asked to see a picture. Here is the picture I think she was expecting to see: 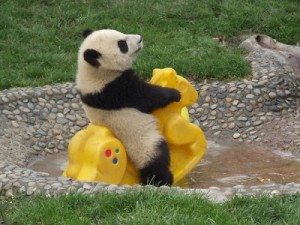 SO adorable, right? Well, here is the picture I showed her:

Can we all agree that pandas should not exist? Really. If they weren’t so adorable (after their hair comes in, I mean, and they stop looking like a smiling hairy penis with tiny claws), we would not go to such ridiculous lengths to keep them alive. I read a New Yorker article recently about all the horrifying lengths zookeepers go to to help the pandas reproduce – including building platforms and weird plastic cylinder structures to help them, um, get comfortable. Some even dress up in panda COSTUMES so they can go in the enclosure and, I don’t know, get them in the mood or something? I hope zookeepers get paid a lot. 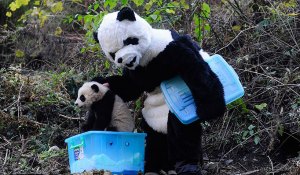 Also, if the pandas are fooled by that crappy costume, then they really are doomed.

I imagine that someday we will find ancient cave drawings about unicorns that are exactly like our modern day panda story: all the cavemen thought that unicorns were so adorable and magical, and then the unicorns stopped reproducing, and the cavemen were all “Ohhg og grunt what the hell grunt?” and used all of their caveman know-how to save the unicorns, and eventually said, “Eh, what are you going to do.” And bam, no more unicorns. Yes, I am basically an anthropologist.

My father-in-law is Chinese. He visited us once shortly after the National Zoo got its first panda years ago, and we asked him if he wanted to go see it. And he said, “No. I’ve already seen a panda in China. They all look alike.” Which is TOTALLY TRUE.

So I guess the point of this is: when the pandas all die, they really had it coming. The end.